Shaanxi Automotive has officially localised its heavy truck production in Mexico while Baoji has signed four projects with a total investment of $2 billion.

2: Product excellence: X3000 is the representative product of Shaanxi Heavy Duty Truck Delong series, the standard configuration is "Weichai engine + Hande axle + Faster transmission", this configuration is the top in the domestic heavy truck, which means the whole vehicle has strong power and towing capacity, and is equipped with a large capacity fuel tank and comfortable cab.

2: Mexico attaches great importance to the automotive industry: it accounts for 17% of Mexico's industrial GDP and drives 20% of foreign investment and over 30% of exports.

3: Mexico already has a global presence: the world's 6th largest producer of vehicles (3.7 million), the 5th largest market for auto parts (US$99 billion) and the 4th largest exporter (US$50 billion).

In addition, our research shows that Mexico also has a relatively complete and diversified industrial system, with light industries such as food, pharmaceuticals, textiles, tanning, clothing and paper, as well as heavy industries such as steel, chemicals and machine building, a relatively developed energy industry, and a long history of oil and mining industries. 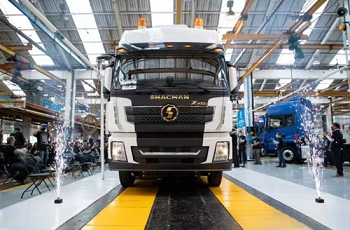 1: Zero tariffs for exports to the US: This is crucial. Although Shaanxi Auto exports very well, as we introduced in "Borrowing from Poly: An African country "orders" 300 million from Shaanxi Auto", Shaanxi Auto is steadily ranked No. 2 in domestic heavy truck exports. But a strong entry into the North American market, the world's No.1, would still be epoch-making for the brand.

2: Accelerated growth in Mexico: After Mexico became the 2nd largest source of automotive imports to the US in 2014, exports to the US have grown for 8 years in a row, with $30.947 billion in exports of "trucks, buses and special vehicles", ranking 2nd.

3: Labour costs have not risen significantly: the average hourly wage for an auto worker in Mexico, including wages and benefits, is $8; while GM's auto workers in the US earn $58 per hour and VW's minimum hourly wage in the US is $38.

As the century-long shift from "full globalisation" to "limited globalisation" is taking place, it is a key concern that Chinese companies are able to achieve global presence with an international perspective, and fortunately Shaanxi Auto seems to have taken a significant step forward.

Incidentally, the state of Hidalgo, where Shaanxi Auto is assembled, is a major auto parts hub in Mexico, and in 2017, JAC (600418) invested $1.45 billion in a plant there in conjunction with a local Mexican partner.

While away in Central America, at the project cooperation signing ceremony for the Qin Chuang Yuan (Baoji) Innovation Promotion Centre in Shaanxi Province held on 10 August, Baoji City signed a contract with Shaanxi Auto for an investment of 2 billion yuan to start four projects with an annual output value of approximately 5.65 billion yuan after completion and commissioning.

It is widely known to the Shaanxi public that Shaanxi Auto Holdings has long proposed a "two-wheel drive to recreate a Shaanxi Auto" strategy due to the split in equity of Shaanxi Heavy Industries, of which the town that carries the "Shaanxi Auto Commercial" is in Baoji.

In November 2017, the Shaanxi Automobile Group's Caijiapo commercial vehicle base was officially opened in Baoji.

In December 2019, the full range of Shaanxi Auto's commercial vehicles was officially announced to be put into production at the Caijiapo Commercial Vehicle Base.

According to the data, by the end of 2020, Shaanxi Auto recorded annual revenue of 26.4 billion yuan and net profit of 1.43 billion yuan, of which the commercial vehicle business of Shaanxi Auto Holdings, which produces mainly the "Xuan De" series, includes heavy trucks and new energy light truck products.

The more significant vision is that Shaanxi Auto's layout around Shaanxi is increasingly taking on the shape of a "whole industry chain". In our article "Shaanxi announces "strong industrial base": 9 "provincial leaders" and "23 chain masters", we clearly mentioned that the "heavy truck industry chain "The core chain owner is supposed to be Shaanxi Auto. In the article, it was also revealed that the "chain master companies are encouraged to lead the upstream and downstream into the park", with Caijiapo, the base of Shaanxi Auto, naturally being the top priority.

A small town accounts for 6.5% of a strong industrial city! This is the contribution of advanced manufacturing to the city.

This is the contribution of advanced manufacturing to the city. The addition of Baoji, because of the presence of "Qin Chuang Yuan" has another meaning.

As Hui Jincai, secretary of the Baoji Municipal Party Committee, said at the event, the signing of the Qin Chuang Yuan (Baoji) Innovation Promotion Centre project marked a new stage of regional synergy and university-ground-enterprise cooperation. The future goal is "to build a regional science and innovation centre, take the Qinchuang Yuan (Baoji) Innovation Promotion Centre as a grip, promote the deep integration of the industrial chain and innovation chain, and further promote the construction of a famous city of equipment manufacturing".

This means that Shaanxi Auto, which has joined the "Qin Chuang Yuan" platform, may be a considerable pursuit of innovation.

On 12 March we published the article "Out of the woods! Shaanxi Auto's "Deyin World" gets H-share "small roadmap"", which aroused the market's concern as everyone was looking forward to the early listing of Shaanxi Auto's main business, but no one expected the "financial-like service provider "The company's IPO in Hong Kong was quietly accelerated.

In August 2019, Shaanxi Provincial Government issued the "Three-Year Action Plan for Promoting Enterprise Listing (2019-2021)", requiring state-owned assets regulators at all levels to formulate a "development quality enhancement program" for state-controlled listed companies one by one, and to establish a roadmap and timetable for listing other state-owned enterprises that are eligible to be listed one by one On March 10, 2020, Shaanxi Province was awarded the title of "Quality Improvement Program".

On March 10, 2020, Shaanxi Province also issued the "Implementation Opinions of Shaanxi Provincial People's Government on Further Improving the Quality of Listed Companies", insisting on the equal importance of expanding the increase and upgrading the stock. It is required to support high-quality enterprises to go public and raise capital, and strive to "double" the number of listed companies by the end of 2025, etc.

Shaanxi will have the highest number of new listed companies in its history in 2020, which is also tempting for any company. After all, Shaanxi Auto has also unsuccessfully sought a shell listing several times, which proves its determination.

Together we look at the financing performance of listed commercial vehicle companies.

If we take into account BYD's continuous spin-offs and the fact that the "new car makers" are seeking to go public at the first opportunity, it has been shown to the market countless times that the automotive industry needs a constant flow of capital investment and whoever gets the capital support first is likely to gain a competitive advantage.

1. Active adjustment of equity and assets.

In April 2021, Western Securities announced that Shaanxi Automotive Group Co., Ltd. intended to make an initial public offering of shares and go public, and in April filed for counselling with the Shaanxi Securities Regulatory Bureau, with its core business stated as "complete vehicles, commercial vehicles and parts".

Based on today's information, we have come to the basic conclusion that "successful listing of the main business" should be the main focus of the current management of the company, whether it is the layout of overseas, or the additional injection of Baoji, constitute a "quality paving stone ".