You are here: Home » News » The mechanics of cranes

The mechanics of cranes

For stability,the sum of all moments at the base of the crane must be close to zero so that the crane does not tip over.In practice,the size of the load that is allowed to be lifted (called "rated load" in the United States) is some value less than the load that would cause the crane to tip over,thereby providing a safety margin.According to the American Mobile Crane Standard,the stability limiting load rating for crawler cranes is 75% of the tipping load.The stability limit load rating for mobile cranes supported by outrigger beams is 85% of the tipping load.These requirements,along with other safety-related aspects of crane design, are determined by the American Society of Mechanical Engineers in ASME B30.5-2018 Mobile and Locomotive Cranes Volume.The standards for cranes installed on ships or offshore platforms are more stringent due to the dynamic loads placed on the crane by the movement of the vessel.Additionally,the stability of the container or platform must also be considered.For cranes installed on a fixed base or main column,the moment generated by the boom,arm and load is borne by the base or main column.The stress in the base must be less than the yield stress of the material or the crane will fail. 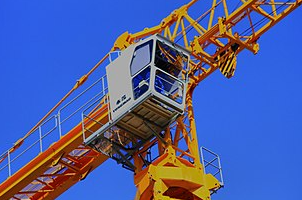 The most basic truck-mounted crane configuration is the "boom truck" or "truck loader,"which features a rear-mounted rotating telescopic boom mounted on a commercial truck chassis.Larger,heavier,specialized "truck-mounted" cranes consist of two parts:the carrier,usually called the lower section,and the lifting components,including the boom.They are connected together by a turntable,which allows the upper to swing from side to side.These modern hydraulic truck cranes are usually single engine machines,with the same engine powering the undercarriage and the hoist.The upper section is usually powered by a hydraulic system from a pump mounted on the lower section through the turntable.In older model designs of hydraulic truck cranes,there were two engines.A man in the lower section pulls the crane over the road and runs hydraulic pumps for the outriggers and jacks.The one on the upper level runs the upper level through its own hydraulic pump. Many older operators prefer twin engine systems due to leaking turntable seals on aging new design cranes.Hiab invented the world's first hydraulic truck mounted crane in 1947.The name Hiab comes from the commonly used acronym for Hydrauliska Industri AB,a company founded in 1944 in Hudiksvall, Sweden,by Eric Sundin,a manufacturer of snowboards who discovered a method of the method of powering the crane.Generally,these cranes are capable of traveling on the highway without special equipment to transport the crane unless there are weight or other size restrictions (such as local laws).If this is the case, most large cranes are equipped with special trailers to help spread the load over more axles,or be able to disassemble to meet requirements.An example is counterweights.Usually, the crane is followed by another truck to haul the counterweight removed for travel. Also,some cranes are capable of removing the entire upper.However,this is usually only a problem with larger cranes and is mostly done with conventional cranes such as the Link-Belt HC-238.When working on a job site,outriggers extend horizontally from the chassis and then vertically to level and stabilize the crane when it is stationary and when it is hoisted.Many truck cranes have a slow travel capability (a few miles per hour) when hanging a load.Great care must be taken not to swing the load sideways from the direction of travel,as most rollover stability depends on the stiffness of the chassis suspension.Most cranes of this type also have a moving counterweight for stability beyond that provided by the outriggers.Loads suspended directly from the stern are the most stable as most of the crane's weight is used as counterweight. The crane operator uses a factory calculated chart (or electronic safety device) to determine the maximum safe load for stationary (cantilever) work as well as (on rubber) load and travel speed.Truck cranes range in capacity from about 14.5 short tons (12.9 long tons;13.2 tons) to about 2,240 short tons (2,000 long tons; 2,032 tons).While most can only rotate around 180 degrees,more expensive truck-mounted cranes can rotate 360 degrees.

The boom of the rough terrain crane is mounted on a landing gear atop four rubber tires and is designed for off-road pick-and-carry operations.The outriggers are used for level and stable lifting of the crane.These telescopic cranes are single-engine machines,with the same engine powering the undercarriage and hoist, similar to crawler cranes.The engine is usually mounted on the undercarriage rather than on the upper part like a crawler crane. Most have 4-wheel drive and 4-wheel steering to traverse tighter,smoother terrain than standard truck cranes with less site preparation.

Wait in the air.