As a red Shaanxi Auto Delong X3000 slowly drove out, Tan Xugang announced that in 2017, the 160,000th complete vehicle of Shaanxi Auto rolled off the line. 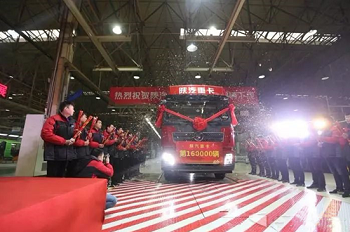 On December 29, the "Shaanxi Automobile Heavy Truck 160,000th Vehicle Off-line Ceremony and 2018 Target Mobilization Meeting" was held in Xi'an. The event was attended by senior management of Weichai Group, senior management of Shaanxi Auto Heavy Truck, representatives of cadres and employees of the company, and more than 40 industry media, including First Commercial Vehicle Network.

Tan Xiguang, Chairman and CEO of Weichai Power and Chairman of Shaanxi Heavy Truck, delivered an important speech at the 160,000th vehicle roll-off ceremony and proposed a target of 200,000 vehicles in 2018. At the same time, Tan Xiguang said that Weichai Power will continue to support Shaanxi Heavy Duty to be stronger and bigger with the strength of the whole group, and better play the role of complete vehicle and complete machine driving.

"One year ago on the same day and in the same place, we held our 2017 mobilization meeting, when we set the goal for 2017: to challenge ourselves and enter the first echelon of the industry. Today, it is a summary of a whole year of work in 2017, and on such a joyous day as the 160,000,000th vehicle coming off the line, we can proudly say that the goal of 2017 has been accomplished." Yuan Hongming, general manager of Shaanxi Heavy Duty Automobile Co., Ltd, said so at the event.

It is understood that the annual sales of Shaanxi Heavy Truck in 2017 will exceed 160,000 units, which is also the best achievement of Shaanxi since the establishment of the plant more than 50 years ago. Among them, Shaanxi Auto's domestic civilian sales exceeded 140,000 units, nearly doubling compared to the same period last year, with a market share of 15.4%, a year-on-year increase of 1.8 percentage points, creating the best results in Shaanxi Auto's domestic civilian sales history.

"Shaanxi Auto has a steel team, and it is with the unremitting efforts of this steel team that Shaanxi Auto has accomplished the achievement of 160,000 heavy trucks coming off the line, and has made the leap from the bottom of the industry to the top of the market." Tan Xugang said.

Shaanxi Auto expects China's overall heavy truck market sales to be between 850,000-900,000 units in 2018, a decline of 22%-27% year-on-year. In such an environment, it is not an easy task for Shaanxi Auto to make an impact on the target of 200,000 units of annual sales. To this end, Shaanxi Auto has formulated a detailed strategic plan. 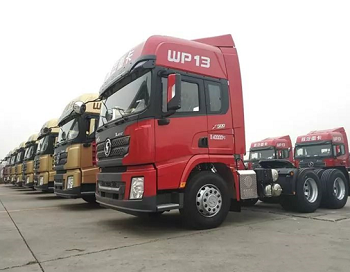 In 2018, Shaanxi Auto will focus on "strengthening advantages and filling shortcomings as core competitiveness; building innovative competitiveness with refined drilling business", stimulating domestic marketing potential by making up for shortcomings, realizing value marketing, and implementing the six-wheel drive marketing strategy in 2020 step by step. The marketing objectives are: to achieve significant improvement of trucks and special-purpose vehicles, a more reasonable product structure, and significant improvement of trend segments such as sedan, cold chain, hazardous chemical, express and sanitation.

In terms of product strategy, Shaanxi Auto Heavy Truck will seize the features and opportunities of Belt and Road, Beijing-Tianjin-Hebei integration, policies and regulations, intelligent interconnection, power upgrade and customer rejuvenation to continuously upgrade its products.

It is understood that in 2017, the annual revenue of Shaanxi Heavy Truck reached 50 billion yuan, which played an important supporting role for Weichai Group's revenue exceeding 200 billion yuan in 2017. At the same time, for Weichai's 2020-2030 strategy, Shaanxi Auto will also become an important executor. Tan Xugang said, "By 2020, Weichai's traditional business should surpass the world-class level, and by 2030 the new energy business should lead the development of the global industry, with revenues reaching 100 billion USD, and become an international powerhouse among the world's top 500 companies. Among them, Shaanxi Heavy Truck will be the executor and moreover the beneficiary of achieving this strategic goal, and will also give full play to the leading role of the vehicle terminal platform in the future to accelerate the implementation of Weichai's 2020-2030 strategy."

It can be said that the 160,000th heavy truck rolled off the line marks Shaanxi Auto Heavy Truck's entry into the first echelon of China's heavy truck industry, which has achieved remarkable results in improving operational efficiency, innovation capability and team building, which has laid a solid foundation for Shaanxi Auto Heavy Truck to hit the target of 20 units.

According to Yuan Hongming, in December 2017, Shaanxi Auto received orders for more than 17,000 units. At the same time, he said that in the first quarter of 2018, Shaanxi Auto wants to complete 40,000 units of sales, injecting a strong agent for Shaanxi Auto to hit the annual target of 200,000 units.