You are here: Home » News » Articulated hauler and its applications

Articulated hauler and its applications

An Articulated Truck,Articulated Dump Truck (ADT),sometimes called a dump truck,is a very large,heavy-duty dump truck used to haul goods over rough terrain and occasionally on public roads.The vehicle is usually all-wheel drive and consists of two basic units:the front,often called the tractor,and the rear, which contains the tipper body,called the transporter or trailer.Steering is achieved by rotating the front relative to the rear via hydraulic rams.This way,all wheels follow the same path, making it a great trail bike, and With half of the world's sales.Although originally conceived as a soil and aggregate transport vehicle (dump truck),the chassis has been used in many other applications including agriculture,mining, construction and road maintenance.From concrete mixer trucks,water tankers and container trucks to large off-road semi-trailer trucks (on-highway applications),hook loaders or cranes,as well as for transporting timber and as a wood chipper platform.Its chassis was also used for military purposes, as its off-road capability was second only to tracked vehicles.An example is the Archer artillery system. 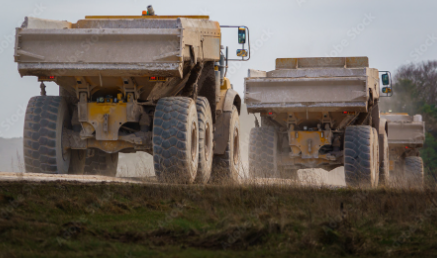 A preserved feature of its farm tractor heritage is the operator's location and basic layout.So the driver sits behind the engine, above the gearbox and front transaxle.A permanently attached trailer cannot move vertically relative to the towing vehicle,but can rotate and swing in the horizontal plane.The operator has a conventional steering wheel and can actuate hydraulic cylinders to push and pull the tractor relative to the trailer.The tractor and trailer sections can move relative to each other at large angles,resulting in a tight turning radius.The trailer axle is driven by a drive shaft extending from the rear of the transmission, with splines and universal joints to accommodate movement between them.All axles are inlet with hub reducers and locking differentials.Originally,the axle differential was permanently locked,but more recent models can be run with an open but lockable differential for better high-speed performance.The usual twin rear axles are combined in a single frame that can pivot relative to the "trailer" frame,keeping all wheels on the ground,but until recently was always unsprung (called a "bogie").Likewise,less common single rear axle trucks usually have no suspension springs in the rear and have suspension on the front axle to give the operator a better ride.Reinforced cabs are sometimes sprung as well,as is done in modern cab engine trucks,as is the driver's seat.The way these sections can twist relative to each other and the way the vehicle steers so that the rear tires follow the same path as the front tires, combined with all-wheel drive provides excellent off-road capability.Top speed limited to 55-60 km/h (maximum road speed for the unmanned Archer Artillery system is "at least 70 km/h";however,this will come at the cost of fuel economy and mechanical wear and will exceed military standard speeds for fleets significantly),with payloads ranging from just under 25 tons to just over 40 tons.

Articulated trucks excel at hauling materials over rough terrain,eg,bogs,bogs,swamps.They are durable and designed to handle big slopes and slippery conditions.This is their main advantage over rigid tractors with excellent load carrying capacity.If articulated trucks do not exceed 55 tonnes,there are rigid truck (trucks with conventional front steering and rear wheel drive) models that can carry up to 310 tonnes, such as the Belaz 7550.The Type 7550,which was in production for five years,was actually a prototype,while the EH 5000 had a payload capacity of 326 tons,one ton less than the Komatsu 960E-1.This is also reflected in the way they are used.Rigid trucks are best used in large surface mines and large quarries,where there is plenty of space and a firm level surface to drive on,while articulated trucks are best used in rough and narrow sites,such as large construction sites.The relatively small size of articulated trucks also enables them to travel on public roads between sites on large construction projects–something that is impossible for the largest haul trucks and may even have to be disassembled to move between sites to move between.For transportation between different construction projects,articulated trucks often have to be transported as oversized cargo on flatbed trailers due to their limited width and weight as well as speed.However,in reality,it is normal for most articulated trucks to haul between job sites,as very few construction sites allow driving on public roads between jobs depending on the size of the machine (chassis, wheels,etc.),and local laws,it may also be illegal.For any distance greater than a few miles,wear and tear on the haul truck is also considered uneconomical, since the time spent in the truck does not contribute to paying for the work.Use trucks and trailers and let them do what they do best,road transport,more efficiently and faster.