Hydrogen energy heavy truck annual sales increased 42 times year-on-year, and the industry is welcoming the "acceleration period" behind a large shortage of professionals

On June 20, the "Medium and Long-term Plan for the Development of Hydrogen Energy Industry in Shanghai (2022~2035)" (hereinafter referred to as "the Plan") released by Shanghai Municipal Development and Reform Commission said that by 2025, about 70 hydrogen refueling stations of various types will be built, the number of fuel cell vehicles will exceed 10,000, and the industrial scale of hydrogen energy industry chain will exceed 100 billion yuan. Prior to this, places including Chengdu and Shanxi have announced their development plans for hydrogen fuel cell vehicles one after another.

However, while hydrogen fuel cell vehicles have a broad market prospect, there is still a big gap of hydrogen energy professionals and high cost of hydrogen refueling stations.

"In terms of technical characteristics, hydrogen fuel cell vehicles are more suitable for breakthroughs in the direction of heavy trucks." A technical staff of Shaanxi Automobile told the Daily Economic News that due to the high power and energy density of hydrogen fuel cells, they are very advantageous in terms of load and range, and thus are more suitable for heavy trucks with high load capacity.

"The main reason for the absolute dominance of heavy truck models in China's hydrogen fuel cell vehicle sales is that the electric stack system of hydrogen fuel cells is not quite suitable for making small volumes to be applied, but rather large volumes so that cost sharing will be relatively reasonable." Cui Dongshu, secretary-general of the National Passenger Car Market Information Joint Committee, said.

From the viewpoint of the latest hydrogen energy industry planning released around the world, it is still tilting toward heavy trucks. The Planning released in Shanghai this time mentions, "Comprehensively promote the application of hydrogen fuel cells in heavy-duty vehicles in the transportation field, and expand the market space of hydrogen fuel cell buses, trucks, forklifts, dump trucks, sanitation vehicles and large passenger cars."

A research report issued by Dongwu Securities (6.760, -0.12, -1.74%) on June 20 believes that the focus of hydrogen fuel cell vehicles will shift from passenger and medium-heavy trucks, and eventually expand to passenger cars in the future. 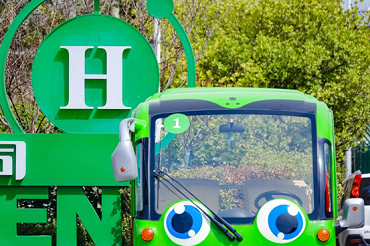 Difficult to recruit people even with high salary

Behind the rising hydrogen energy industry, it is hard to hide the reality of shortage of professional talents.

"This hydrogen energy researcher position has been listed on the recruitment website for more than three months, and we have not yet recruited the right person." A headhunter told the reporter that at present, there are only a few domestic colleges and universities that have opened hydrogen energy majors, and they can only recruit talents with chemical, thermal power, energy engineering and other majors similar to hydrogen energy.

A person in charge of a domestic commercial vehicle company told reporters, "Part of our hydrogen energy R&D personnel are transferred from positions such as thermal system engineers, but positions such as proton exchange membrane engineers, which require relevant complete development experience and professional knowledge, need to be recruited from outside."

The reporter saw in a recruitment platform that the monthly salary for the position of "director engineer of proton exchange membrane development" is between 45,000 and 70,000 yuan. In addition, the monthly salary of technical positions related to hydrogen fuel cells is also generally above 30,000 yuan. The above-mentioned headhunter said, "In the last two years, it is obvious that the number of positions in the field of hydrogen energy is increasing and the salary is higher than before, but it is difficult to recruit people with high salary because there are few talents with the corresponding profession."

There is an analysis that because the prospect of hydrogen energy industry is unknown before, enterprises are more cautious in manpower investment, thus there are few employment opportunities and low treatment, and the relevant talents are not gathered enough; on the other hand, what the hydrogen energy industry needs is knowledge composite talents, but the current way of training talents in universities is limited, there are few direct counterpart majors, and no system has been formed in interdisciplinary and cross-field training.

Recently, the Ministry of Education issued the "Work Plan for Strengthening the Cultivation System of Higher Education Talents in Carbon Dafeng and Carbon Neutral", in which the construction of disciplines related to energy storage and hydrogen energy is put in the first place of the three major shortages of talents in the field of "double carbon". According to the reporter's understanding, "hydrogen energy science and engineering" has been officially listed in the catalog of undergraduate majors in general higher education institutions, and North China Electric Power University has added this major.

The "Planning" released by Shanghai also proposes to encourage universities to cultivate hydrogen energy-related disciplines and optimize the setting of disciplines such as machinery, chemical industry, materials and energy; encourage the development of key hydrogen energy technologies and application innovation as the guide, expand the channel of talent introduction and introduce overseas high-end talents.

In addition to the large shortage of professional talents, hydrogen fuel cell vehicles are still not out of the cost problem.

Take the hydrogen heavy truck as an example, the data of the research report of Guolian Securities (11.450, -0.05, -0.43%) shows that by dismantling the whole life cycle (hereinafter referred to as TCO) cost of a 35-ton hydrogen fuel cell heavy truck, the vehicle acquisition cost and energy use cost together occupy 99% of the TCO cost. Among them, the cost of fuel cell stack and hydrogen storage system accounts for 70% of the vehicle acquisition cost.

When the hydrogen is filled into a hydrogen fuel cell vehicle, it has to go through three major supply chains, namely, extraction, storage and transportation, and refueling, so the sales price depends directly on the cost of these three chains, especially in the refueling chain. According to the data of China Hydrogen Energy Alliance, the cost of building a 500kg hydrogen refueling station with 35MPa refueling pressure is 12 million yuan (excluding land cost), which is three times of the traditional gas station, and the unit refueling cost is about 13~18 yuan/kg.

The reporter noticed that the hydrogen refueling stations are subsidized in the hydrogen energy industry development plans introduced in many places. For example, on June 17, the Chengdu Municipal People's Government issued the "Action Plan for Optimizing Energy Structure for Green and Low-carbon Development of the City" and other documents, which proposed to encourage the demonstration of hydrogen energy application in multiple fields and give subsidies of up to 15 million yuan for the construction and operation of hydrogen refueling stations.