Cooperation between Shaanxi auto and Poly

On July 30, 2020, Poly Technologies Limited (Poly Technologies) signed a contract with Shaanxi Auto Group for the export of four different trucks and spare parts to a country in Africa, for a contract amount of over 300 million yuan.

The press release stated that this was the largest single contract signed by both parties. And this is how we came to notice that "Shaanxi Auto is actually the number one brand of Chinese heavy trucks exported to Africa, and in 2018 it also set up an assembly plant in Algeria".

This time, those who signed with Shaanxi Auto are Poly International and Poly Technology under the Group's name.

Let's look at Poly International first: this is the Group's main platform for international trade, overseas resource development and engineering construction. In the field of international trade, it has established business relationships with more than 100 countries and regions. In the field of engineering construction, we have built representative key projects at home and abroad, such as the Lanka Army Hospital and the Hong Kong-Zhuhai-Macau Bridge. 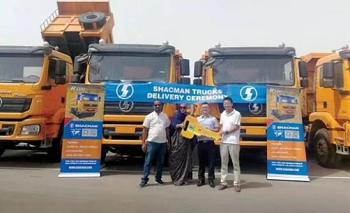 Then look at Poly Technologies: this is the predecessor of Poly Group, which was established in late 1983 and is still the core enterprise of the Group, this is not much to introduce, we should all have some understanding.

Through the understanding of these two contracted entities, it is not difficult for readers to draw a feeling.

Shaanxi Auto's "strong manufacturing" capabilities and Poly's "strong international" strengths are expected to complement each other. By "piggybacking" on this platform, the company can be said to have taken advantage of the platform to go to sea.

In fact, Shaanxi Auto and Poly are no strangers to each other, as they first joined hands back in 2015.

In November that year, the two sides formed Shaanxi Poly Special Vehicle Manufacturing Co Ltd based on a consensus on the prospects of the domestic and international special vehicle market and the transformation and development of the enterprise, with the business scope including the research and development, production and sales of special vehicles and parts, as well as the import and export of goods and technologies to achieve complementary advantages.

To date, Poly has set up its own companies in Shaanxi, with businesses in real estate, investment, logistics and other businesses. Given Shaanxi's strengths in military and manufacturing industries, Poly Group is expected to focus more and more on Shaanxi and continue to increase its presence in the future.

In fact, as the largest manufacturing company in the northwest, Shaanxi Auto's "heavy trucks" have been performing well in both domestic and international markets for a long time.

In the seven years between 2011 and 2018, with 2015 as the cut-off point, Shaanxi Auto has overtaken Foton, moving from 5th to 4th, and is now showing signs of challenging for 3rd place (Heavy Duty). (Shaanxi Auto's cumulative sales in the first half of 2020 were 108,100 units, up 9% year-on-year.) Translated into market share indicators, Shaanxi Auto has improved from 11.2% in 2011 to 15.2% in 2018, with dump trucks, high horsepower coal tractors, port tractors, dump trucks and natural gas vehicles all ranked 1st in the industry.

What about Shaanxi auto heavy truck overseas? The data surprised and surprised us more

The strength and growing momentum of Shaanxi Auto, the "giant" in the industry.

In the African market, Shaanxi has been the number one brand of Chinese heavy trucks exported to Africa since 2010.

In 2014, Shaanxi Auto's export business in Africa, its traditional market, was concentrated in North Africa, with Algeria accounting for 70% of China's overseas exports.

In 2018, the completion and operation of Shaanxi Auto's assembly plant in Algeria was the first and currently the only Chinese heavy truck enterprise to obtain the vehicle assembly license from the Arabian government, and has exported a total of more than 40,000 units of SHACMAN (Shaanxi Auto's heavy truck brand) to the Arabian side since 2007, accounting for 80% of the market share of construction vehicles in the Arabian side.

In 2019, Yuan Hongming, Secretary of the Party Committee of Shaanxi Auto, made a targeted visit to investigate the Kenyan market.

The African market is "destined" for Shaanxi big lorry truck

Is Africa a big market or not? In terms of its population of 1.2 billion, it is clearly promising, and in terms of import and export volumes, it does not seem to be that important. But what we are concerned about is that this continent, where mankind was born, is undergoing many new changes, and these new changes are exactly the right opportunities for Shaanxi enterprises.

1: The emergence of "individual star countries" in Africa.

Let's take the example of Ethiopia, the African market where Shaanxi Heavy Truck is located, and Kenya, which is about to enter the market, and is a representative country of Africa's growing growth, as well as the smaller Rwanda, which is also growing very fast.

2: Africa has always been the "Young New World".

So what do these two characteristics mean in terms of "industrial opportunities"?

1: Infrastructure development: as in China, "to get rich, first build roads", urbanisation is expected to be strong and the "infrastructure mania" will not fall by the wayside. Here's a statistic: Africa is the largest market for foreign labour contracts in Shaanxi. So how can there be no opportunity for machinery and equipment when "people" are going out? So manufacturing companies such as Shaanxi Auto have a head start. And if the linkage with Shaanxi Construction is strengthened, the space will still be worth waiting for.

2: Labour-intensive industries: This is still very much China's original "three to one", the next stop in the global industrial division of labour, so there is a great deal of scope for something like the textile industry, with Xi'an's standard sewing machines having been exported to Africa more than 10 years ago.

On top of this logic, we find that Shaanxi has moved on.

Shaanxi Construction: overseas revenue in 2017 was 11.8 billion yuan, up 139% year-on-year. Starting with the construction of the aid to Cameroon's parliament building in 1978, Shaanxi Construction has formed 6 major overseas operating regions in Southeast Asia and South Pacific, Middle East and West Asia, Central and South Asia, West Africa, Central Africa and Southern Africa. Please note that Africa accounts for 3 of them.

WEPCO: It has set up 12 branches or offices in Africa. Starting with the first bulk export of 220kV transformers to Africa in 2007, it now has overseas revenues of nearly RMB 3 billion and has taken root in countries such as Egypt through joint ventures to build factories.

LONGI: Overseas sales reached 4,991MW in 2019, up 154% year-on-year, with operating income from overseas markets accounting for approximately 60% of total revenue. In contrast to the decline in Asia Pacific revenue, there was growth in the Americas, Europe and Africa, where business representatives were placed in South Africa.

This reckoning with Shaanxi Auto allows us to confirm: there really is a market for Shaanxi industry in Africa. Ministry of Commerce data also shows that Shaanxi's main exports to Africa from January to April 2019 included solar cells, cars, diesel trucks and power equipment.

In the context of a shaken global trading system, strengthening the focus on African markets is actually a viable option for "Shaanxi industry". Whether in the infrastructure sector or in labour-intensive industries, "Shaanxi industry" has certain advantages.

Looking to the future, as was the case with the first foreign companies to enter China, their popularity and share of the market are likely to be laid down today.