Policy guidance: the intention is to create a chain of Shaanxi heavy truck

For a long time, in the "free market" and "industrial policy" in the formation of many arguments, regardless of the original intention of scholars, in fact, the two should be compatible, not simply opposed. Otherwise, the Biden administration has just signed the $280 billion "Chip Act", how to explain?

Therefore, we agree with the Shaanxi Development and Reform Commission and the Department of Industry and Information Technology to do the guidance of the intention, but more "respect for the market" of the modern concept is that the "planning" is designed entirely in accordance with the "rules of business", invariably once again confirmed the "for government" and "effective market".

1: Geospatially speaking, it is in line with the current resource endowment.

For example, we will build the core area of fuel cell industry in our province based on Xi'an New District, create two inter-city hydrogen corridors, Yulin-Yan'an-Xi'an and Xi'an-Weinan-Hancheng, and focus on building Xi'an equipment R&D and manufacturing center, Yulin hydrogen heavy truck equipment manufacturing and hydrogen supply and application center in northern Shaanxi, and Weinan hydrogen supply and application center.

"The two cores and three centers point to the innovation drive of "Qin Chuang Yuan", the concentration of two key energy and chemical production capacities, and the manufacturing and application advantages of Xi Yu Wei.

The project will be completed in the second quarter of 2012.

2: From the upstream and downstream perspective, it is in line with the company's own planning.

Such as upstream capacity end, in northern Shaanxi rely on Yulin Lanzhou Petrochemical, Yanchang Petroleum, the pursuit of 80,000 tons / year capacity, in Guanzhong rely on Changqing Petrochemical, Yanchang Xinghua, the pursuit of 50,000 tons / year capacity. It also encourages the construction of green hydrogen demonstration projects by Yanchang Petroleum and CGNPC. 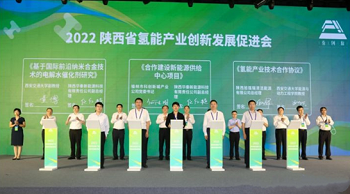 As for the downstream network, the backbone network of hydrogen stations will be gradually expanded around the Yulin "short reverse transportation" demonstration line, the service areas of Xi'an-Yulin Expressway and Xi'an-Hancheng Expressway, and "various market entities" will be encouraged to enter the hydrogen refueling network around urban public transportation, logistics and distribution, and municipal operations. The construction of hydrogen refueling stations is encouraged by "all kinds of market players" around urban bus, logistics and distribution, and municipal operations.

Obviously, what goes against this "encouragement" is that these companies themselves intend to enter into hydrogen energy.

3: From the perspective of R&D and production, it is in line with the expectation of a large manufacturing province.

In the "Three-Year Action Plan for the Development of Hydrogen Energy Industry in Shaanxi Province (2022-2024)", one of the priorities of the "industry chain" is clearly placed on "equipment manufacturing". We all know that the goal of our 23 industrial chains is to "strengthen the foundation of industry", and in the detailed text we see a series of familiar names with detailed goals.

For example, we support Yanchang Petroleum and Western Materials to speed up the layout of fuel cell industry, and suddenly develop key technologies and components, so that in 2024, we can basically realize the local mass production and support of hydrogen fuel cell systems.

For example, support Faster and Hand Axle to develop special transmissions, reducers and axles, support the manufacture of complete vehicles in the province, and require that by 2024, the capacity of 5,000 units/year of fuel cell vehicle production will be realized.

For these technologies, the financial lollipop is still very confident. Because the financial signal synchronization flash, is playing the "value discovery" function.

The Program and other documents mention that the establishment of hydrogen energy-related industrial funds in Shaanxi Province will be accelerated, and the one that affects this is Shaanxi Finance Investment, whose Shaanxi Guidance Fund is actively cutting into the hydrogen energy industry sub-fund establishment program.

If we supplement the "innovation chain" with Xi'an Jiaotong University and Northwestern Polytechnic University, and connect the "industry chain" with the "financial chain", it is basically what we have been promoting. "This idea was also reflected in the promotion meeting on the 15th.

From this perspective, the intention of the Plan is to "guide Shaanxi to seize the windfall of hydrogen heavy trucks". Because everyone is still in the starting stage, the market has also given a signal.

In 2020, hydrogen heavy trucks will be demonstrated in small batches.

For the future, Academician Gan Yong of the Chinese Academy of Sciences said in 2018 that with the direction of "changing diesel to hydrogen", by 2050, more than 50% of heavy trucks will have hydrogen fuel cells as engines.

Therefore, we can understand why documents such as the Plan "emphasize the uniqueness of the industry", because northern Shaanxi, as "China's Kuwait", is itself a key area for heavy truck ownership.